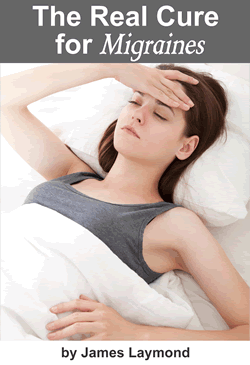 If you suffer from migraines and are looking for a cure, this book is for you.“The Real Cure For Migraines” doesn’t rely on old wives tales or third-hand information. This book is the result of personal experience and twenty years of research, trial and error, and intense study. It provides simple and clear instructions on how you can eliminate your migraine headaches quickly and keep them away for good.

Developed and refined by former extreme migraine sufferer James Laymond, this system doesn’t require you to buy any new pills or attend any therapy. You already have what you need to make the changes that, for most people, will end migraine suffering over night! You won’t even have to change your diet or add any new foods. Learn the system now that has ended suffering for people who thought they would have to live the rest of their lives with migraines. Open this book, get out of the pain and on with your life! Order now for Kindle | Nook | Kobo

Here is a message from author James Laymond about this book:

I used to have terrible migraines. I had them almost every day. They were so bad that they altered my life dramatically.

I couldn’t work when I had them, I couldn’t talk because the pain was so intense that it dominated my focus and consciousness. When I was having a migraine, I absolutely hated life. During my suffering, I would imagine myself floating into the sun and disintegrating into nothingness. At least the pain would be gone.

I would have to remind myself of how much I loved my family and that I wanted to live even though the pain made me feel so miserable.

Friends, family and even strangers would offer tips of how they heard that a certain herb would help. None did for me. After nearly 20 years of suffering, I had tried many different things in hopes of finding even the slightest relief. Here’s a partial list of what I tried:

-Getting a new prescription for my glasses and contacts -Hypnosis -Chiropractic (it helped sometimes but wasn’t a solution) -Herbs -Prescription drugs (big on side effects, small on relief) -Massage (this also helped sometimes but wasn’t a solution) -Getting more sleep -Getting less sleep -Getting more exercise -Getting less exercise -Being a vegetarian -Staying off the computer -Juicing -Coffee (this probably worked best but was inconsistent and didn’t prevent the migraine, just slowed it down.) -Yoga -Acupuncture -Bananas and potassium sources/supplements -Every vitamin and mineral known to man -Positive affirmations where I would literally tell myself that my migraines were gone. But the next day, I’d have another. -Magnets -Changing air filters and duct cleanings for my home -Avoiding florescent lights -Aroma therapy -“Chi” (it’s supposedly an energy therapy done with just the hands) -Having my mercury fillings removed (I only had two and am glad I had them removed, but it didn’t provide migraine relief) -Ionic therapy

Maybe you could see my desperation increase just from the list itself. All of those things supplied limited relief at best and most didn’t do a thing. I had settled into an existence of drugging myself when I felt the pain coming on and sometimes even before. I took more than I should and hoped it didn’t damage my kidneys, but to be honest, I didn’t care. I just wanted some relief. I couldn’t even enjoy the times I didn’t hurt because of the dread I’d feel for the next hell on earth I would experience.

So I think you can see, I paid my dues to the migraine club. And I had learned to be skeptical of promised cures. I figured the people who were telling me to try something were either dishonest salespeople, gullible, or wishful thinkers. I would even catch well-intentioned folks in lies. Someone who said that they had eliminated a certain food from their diet and that stopped their migraines would have a migraine. In confusion I’d ask if they had eaten that “trigger food.” When they answered that they hadn’t, they’d often further admit to me that their migraines hadn’t really gone away but had only seemed to be fewer for a few days. But then they would often admit doubt about even that. You’d be amazed how that odd story played out over and over.

It all added up to continuing desperation, frustration, and panic that I might never get to live a life free of migraines.

The experts, though appreciated, were usually pretty vague, blaming the migraines on some mysterious “stress,” or “hormones” with the only hope of some relief being stronger and stronger drugs to try to mask over the pain but that usually came with terrible side effects. And there was rarely an explanation as to why my body would decide to have a migraine because of “stress” or “hormones.”

I began researching migraines, cluster headaches, and headaches in general. I read everything I could get my hands on or a search engine could find. I wept. I prayed. And then one day I made a breakthrough after a discussion with my grandmother-in-law. A medical detail she shared with me from the 1930’s led me down a rabbit hole. Three steps in and I found something else to “try.”

Though it was logical and made perfect sense to me, I wouldn’t let myself believe that it was anything more than something else on the list of failings. But to my astonishment and pure joy, it worked outright and immediately. Literally the day that I strung the details together was the last day I have had a migraine headache. That was nearly five years ago. And I was having them almost every day!

After several months of total, complete relief, I started looking and asking around to see if any of the migraine experts were telling their patients about this. So I asked some of my friends in my circle of migraine sufferers. One friend flew to New York every month to try the next drug but so far nothing had been able to touch her pain. The only thing the specialist had to offer her was one expensive drug after another. The reason of course, is because in order to raise money to study a possible treatment, a financial return has to be probable to entice investors. Since the system I had learned was free, there would be no money spent studying it.

I shared the system with her and, being a fellow skeptic, she calmly said she’d try it. She was the first other than myself to try it that I would have personal access to. Two weeks later she came to me with tears in her eyes and hugged me. It had worked for her as well! No more trips to New York to spend money on false hope!

I was thrilled that what I had learned had made a major difference in someone’s life, but I was also frustrated. Frustrated that for survival’s sake, the medical industry had no interest in entertaining the idea that something other than a medical drug, medical procedure, or medical device could help a migraine. Whether it would or would not work, it would not be studied if there was no profit to be made in the product. It was that simple.

So I actually felt guilty that I had no migraines. Where I had felt happiness before, even laughing in joy as day after day passed without a migraine, I now felt a duty to share what I knew to the millions of migraine suffers out there who continued day after day in agony. I knew that little would find relief from the expensive drugs and surgery that was pushed toward them. I couldn’t help but feel empathy and that I had to do something. My mom used to suffer with migraines, and in the cringes and tears of fellow sufferers, I still see her face and I can’t simply enjoy my own relief.

So I wrote a book. It’s not that long, only a little over twenty pages. The price is only $3.99, something that anyone can afford and the money allows me to get the message to more people. I want to show as many as possible how they can end migraine pain for good and live the life that they want to live. It’s really that simple. This literally could be the last day, week, and month that you have a migraine! The book is available on Amazon Kindle, Nook, and Kobo. And you don’t have to have a prescription or be referred to it. There’s no co-pay or paperwork.

P.S. – Some doctors out there are actually referring patients to this book because their assistants who weren’t finding any relief from all the latest drugs they had access to found relief through this system. The doctors have even called me personally to ask more details and that is why I decided to write this book.

I’m not a salesman, so I can’t stomach saying something like “Don’t delay, buy today” or to be otherwise pushy. But I believe in this so much that I’ll simply say, all you have to lose is about four bucks. Not even a drop in the bucket to what you’d pay for other routes. I’m very specific in the book and I’m telling you, it works. So grab a copy and tell a friend who suffers. Again, it’s on Amazon Kindle, Nook, and Kobo.