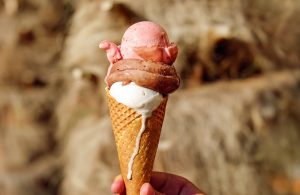 Brain freeze is practically a rite of summer. It happens when you eat ice cream or gulp something ice cold too quickly. The scientific term is sphenopalatine ganglioneuralgia, but that’s a mouthful. Brain freeze is your body’s way of putting on the brakes, telling you to slow down and take it easy. Wake Forest Baptist Medical Center neuroscientist Dwayne Godwin, Ph.D., explains how it works.

“Brain freeze is really a type of headache that is rapid in onset, but rapidly resolved as well,” he said. “Our mouths are highly vascularized, including the tongue — that’s why we take our temperatures there. But drinking a cold beverage fast doesn’t give the mouth time to absorb the cold very well.”

Here’s how it happens: When you slurp a really cold drink or eat ice cream too fast you are rapidly changing the temperature in the back of the throat at the juncture of the internal carotoid artery, which feeds blood to the brain, and the anterior cerebral artery, which is where brain tissue starts.

“One thing the brain doesn’t like is for things to change, and brain freeze is a mechanism to prevent you from doing that,” Godwin said.

The brain can’t actually feel pain despite its billions of neurons, Godwin said, but the pain associated with brain freeze is sensed by receptors in the outer covering of the brain called the meninges, where the two arteries meet. When the cold hits, it causes a dilation and contraction of these arteries and that’s the sensation that the brain is interpreting as pain.

Analyzing brain freeze may seem like silly science to some, but “it’s helpful in understanding other types of headaches,” Godwin said. full info